Never heard of Plern? Here’s how a Thai music streaming platform quickly surpassed one million app downloads despite stiff competition from Spotify, Apple Music and YouTube Music. The platform powered by Tuned Global was launched just a few months ago.

If you don’t live in Thailand, you’ve probably never heard of the name “Plern”. Domestically, however, Plern is a booming music streaming platform that is rapidly gaining notoriety. The platform hit 1 million app downloads on iOS and Android just three months after launch, with a localized focus quickly attracting subscribers. That was enough to get noticed by global mega-giants like Spotify, Apple Music, and YouTube Music, all of which have a serious presence in the country.

Plern told Digital Music News that they first hit the one million download mark at the end of February. In addition, the service has accumulated more than 600,000 hours of listening time, with activity rates on the rise. On February 21, Plern became the number one app on Google Play in Thailand, across all categories.

It all sounds pretty exciting, especially in such a saturated market. But Plern didn’t start in a Bangkok internet cafe. The platform was created by Thai entertainment giant GMM Grammy, with Tuned Global leveraged to power the complete technology solution.

For B2B streaming company Tuned Global, which focuses on building custom streaming music and entertainment platforms, the tie-up made sense. GMM Grammy didn’t want to create a Spotify clone: ​​with its feet firmly planted in Thai culture, the company aimed to offer something better suited to Thai tastes and tech usage habits. This fits perfectly with Tuned Global’s go-to-market strategy, which is focused on delivering platforms that differentiate themselves from global one-size-fits-all streaming giants.

We’ve been covering Tuned Global’s biggest launches for years, part of a wider partnership designed to draw attention to the company’s unique model. While mega-players like Apple Music replicate their app across dozens of differentiated markets, Tuned Global brokers deal with companies that want something less straightforward.

Incidentally, Tuned Global’s customer base includes major labels, which have tapped the company to power artist-focused apps and experiences. But this also extends to the worlds of advertising, fitness and sports. One of Tuned Global’s biggest projects is UFC Ultimate Sound, a fighter-focused streaming media app for Ultimate Fighting Championship fans.

At all Tuned Global facilities, customization is paramount. For the UFC, the experience revolves around the fighter. For Plern, the focus has been on local artists, labels and access, with significant differentiation from globalized platforms. 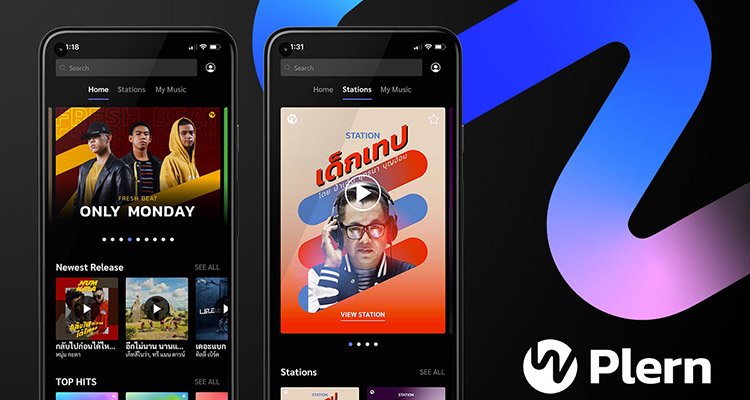 This differentiation quickly translates into traction. Asawin ‘Ant’ Rojmethatawee, EVP of Music Streaming Business at GMM Grammy and head of Plern, told Digital Music News that Spotify has been in the Thai market for years. But Spotify has missed out on whole swaths of Thai music culture, with genres like “luk thung” (ลูกทุ่ง), or the Thai equivalent of country music, ignored by the Swedish platform.

“55% of the Thai market is made up of local ‘country’ or luk thung music,” Rojmethatawee said. “But Spotify hasn’t focused on that genre at all.”

It’s part of a broader focus on localized artists, with Thailand-based record labels including RS, Serng Music, Top Line Music, Sure Entertainment, Siang Siam and Solution One. Rather than just establishing a Thai office, Plern and GMM Grammy are deeply rooted in Thai culture. The result is an app that offers more curatorial benefits and better access to Thai artists and scenes.

But it goes beyond Thai music culture.

Rojmethatawee explained that Thai mobile usage preferences are quite different from most Western markets. For example, Thai users generally conserve bandwidth on their premium and prepaid mobile accounts, and save heavier bandwidth streaming for wifi-heavy environments. This means that on-demand listening often involves offline playlists. And videos aren’t usually viewed outside of the home or office, with the preference on YouTube often being audio-only “viewing”.

“A lot of [Thai] people use a prepaid top-up model, so they rely on wifi with no data at home,” Rojmethatawee explained. “So they don’t care so much about the video.”

This has particular implications for YouTube, although it also creates headaches for Spotify. Instead of monthly plans, many Thai users are simply day-to-day users, which doesn’t quite fit with recurring monthly fee structures (Spotify is now launching a daily plan in response). “Many are willing to pay on a daily basis, but they don’t top up on a monthly or even weekly basis,” Rojmethatawee continued.

For Plern, these considerations are built into the offer. The platform is focused on providing a low-data alternative to high-bandwidth video and audio, while focusing on benefits such as tetherless access, on-screen playback locked, unlimited song skips and offline listening.

But Plern isn’t just picking up music fans who haven’t signed up on one of the major platforms. Instead, the Thai market is in its infancy when it comes to music streaming. Unlike saturated markets like the United States, Thailand is still wide open. According to the company, only 20% of the country’s roughly 50 million smartphone users use a music streaming app. Currently, radio and YouTube command a much larger share of the action, though Plern woos users through a combination of ad-supported and premium accounts.

Tuned Global has entered into an agreement with Musiio, an AI-intensive music metadata company, to help Plern mark up and populate its catalog with the appropriate metadata. This, combined with Tuned Global’s existing metadata from its licensed label partners, has helped Plern create better curation, search and playlist capabilities. “In metadata-poor environments like Asia, access to Musiio’s technology within Tuned Global’s platform helps enrich our local catalog to be searchable and more efficient for music recommendations. “, said Rojmethatawee.

Now it’s off to the races. By the end of 2022, Plern hopes to attract 5 million users, a daunting task despite early progress. Undoubtedly, global giants will take notice and emulate the localized approach.

If you love music, you probably use the YouTube Music app often. You can go to the app and find the song you want using the app’s search tool, or you can ask your digital assistant to play a specific song from a specific artist (for example, ” play The Beatles’ Revolution Number 9 on […]

Google officially pulled Google Play Music last year in an effort to move everyone to YouTube Play Music, and since then the company has been working to make the transition as smooth as possible, while removing the service’s integration. origin of its other products. . For Android Auto users, Google Play Music has long been […]